TENS OF THOUSANDS FLOCK TO KAVADY CEREMONIES ALL OVER THE COUNTRY 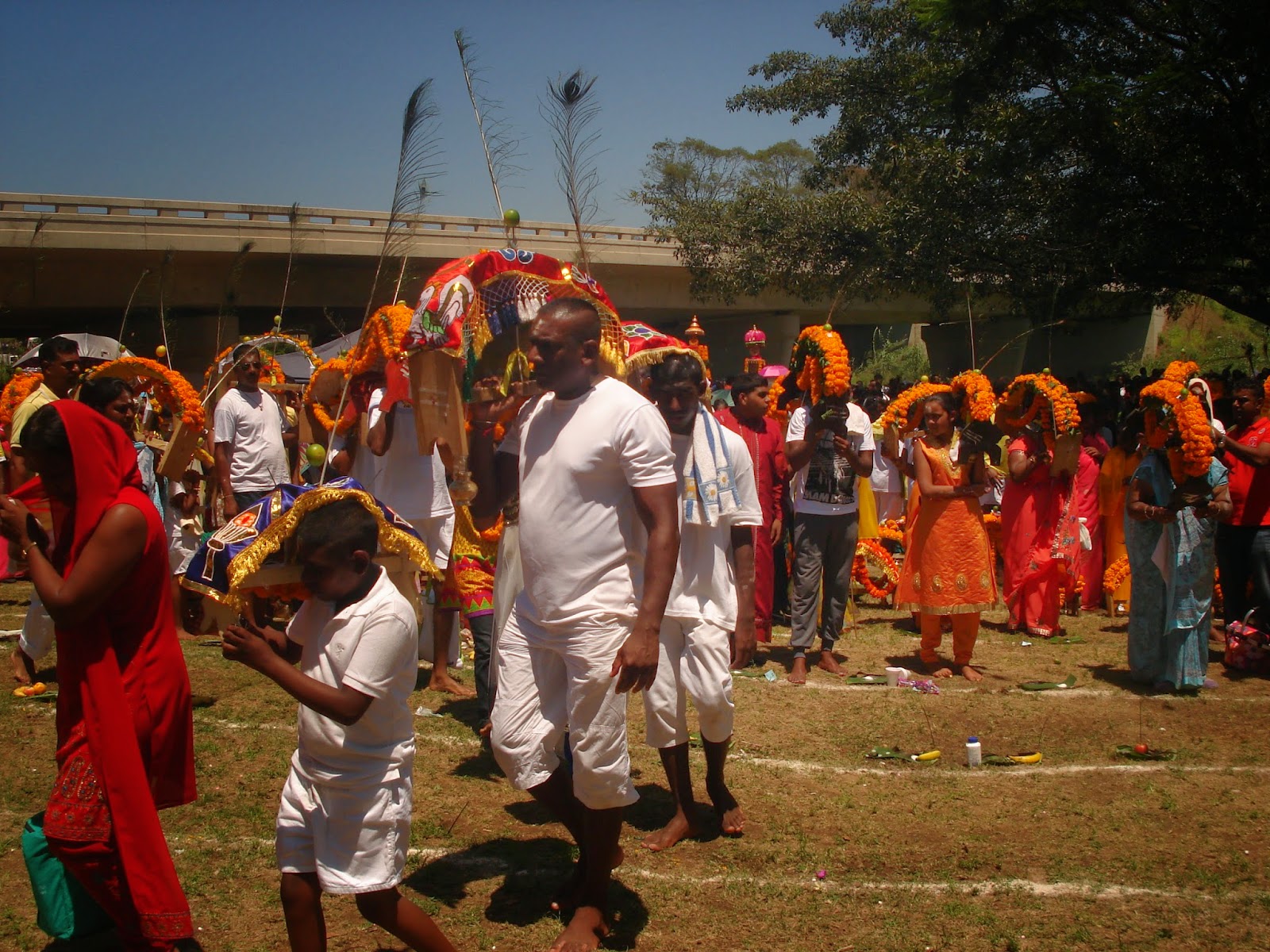 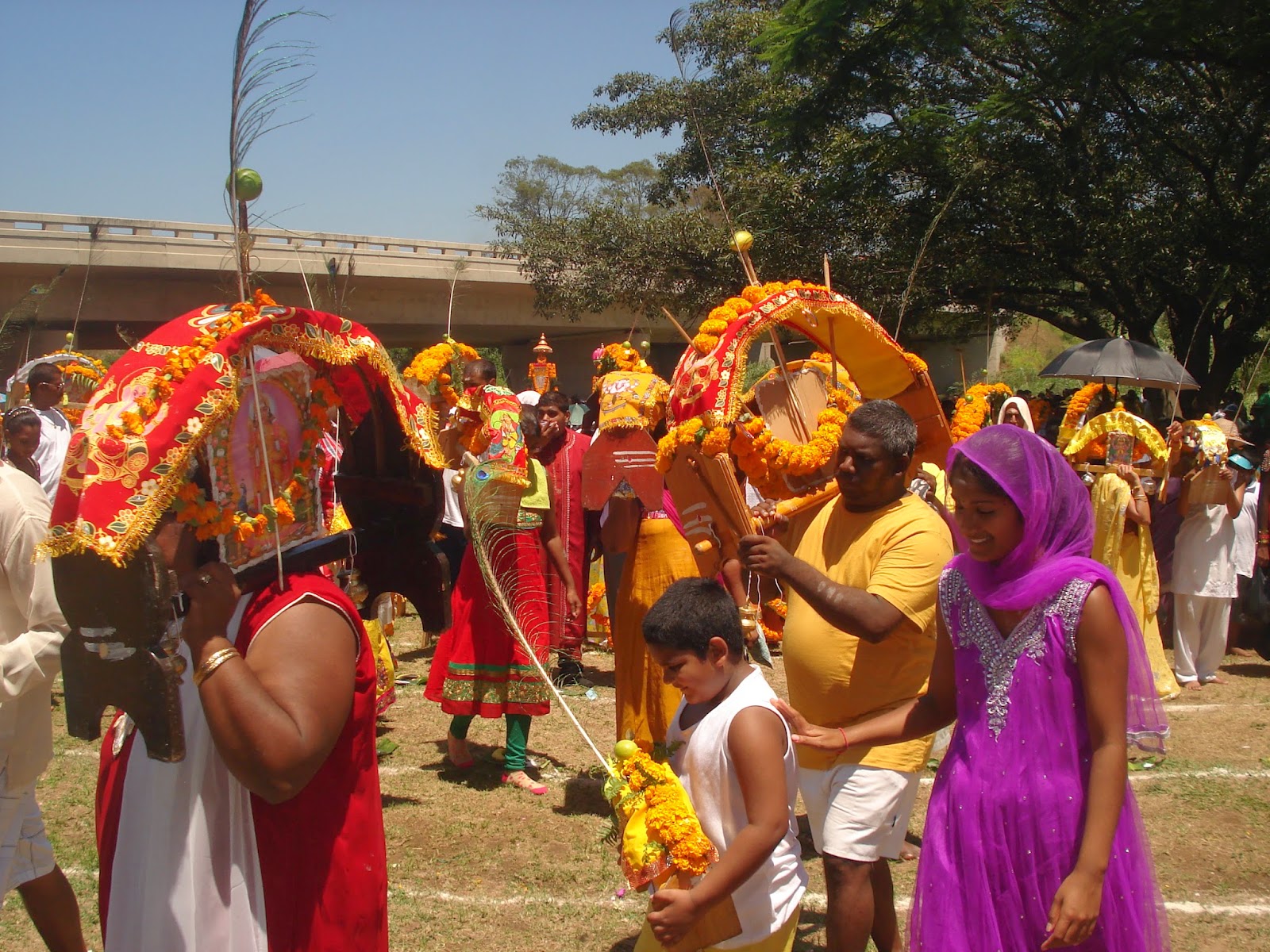 South Africans have once again participated in their tens of thousands in the annual Kavady religious ceremony  throughout the country on Tuesday, February 3 and Sunday, February 8.
The Kavady ceremony, which was brought to the country by our indentured forefathers and mothers along with other cultural, religious, musical and educational norms and values, was observed by devotees at almost every temlpe throughout South Africa. The devotees and their family members and friends thronged temples in towns such as KwaDukuza, Tongaat and Verulam on the North Coast, in Phoenix, Chatsworth, central Durban, towns such as Isipingo, Umzinto, Park Rynie, Sezela and Port Shepstone on the South Coast, Pietermaritzburg, Ladysmith, Dundee, Newcastle, and other small towns in the midlands and Northern Natal. 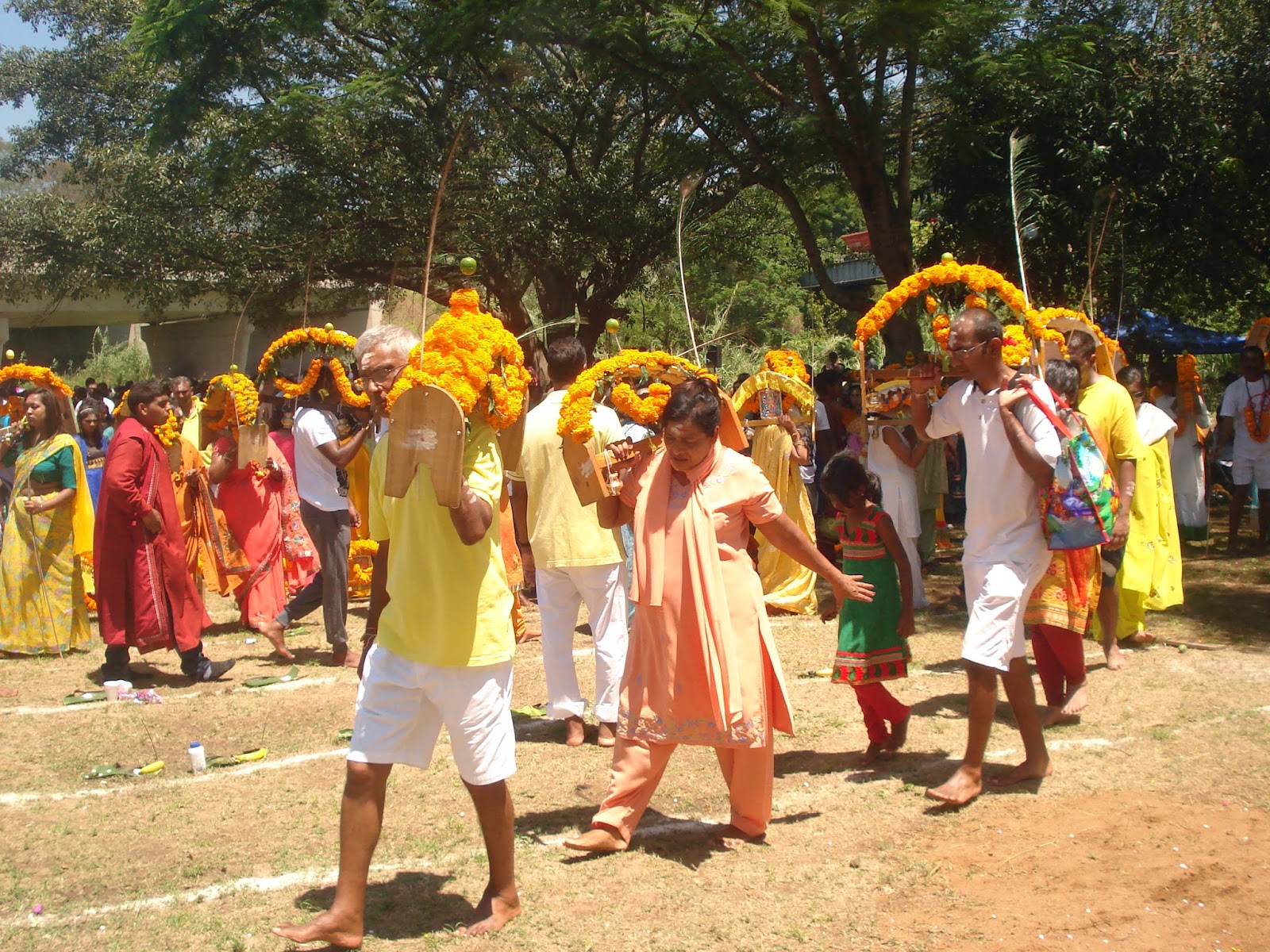 There were also similar scenes in the Johannesburg-Pretoria region, where there's a very high concentration of people who have moved from KwaZulu-Natal. There were also Kavady ceremonies in Cape Town, Port Elizabeth and East London.
I had the privilege of attending the Kavady ceremony at the Shri Subramaniar Alayam in Umdloti Drift in Verulam where more than  1 500 devotees, both young and their parents, sought the blessing of Lord Muruga on Tuesday, February 3, and on Sunday, February 8. Here I found the young especially being involved in not only carrying the Kavady on their shoulders but also pulling the chariots with their bodies fully pierced with needles.
It was wonderful  to see the young men and women demonstrating so much enthusiasm and commitment for the ceremony. The parents I spoke to expressed their satisfaction that their children will now carry the Kavady ceremony into the next millenium. 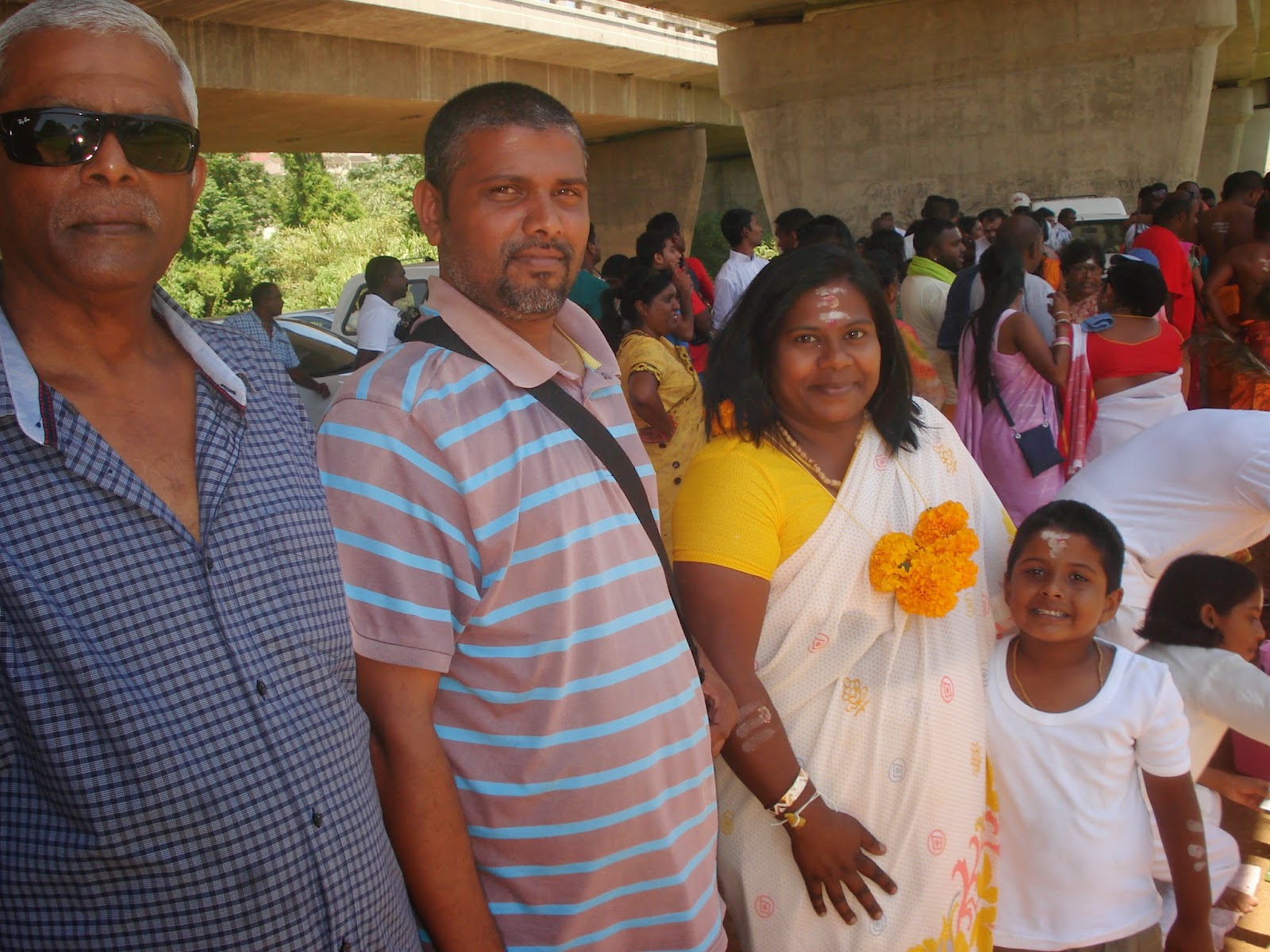 (Mr Simon Moonsamy with his son, daughter-in-law and grandson) 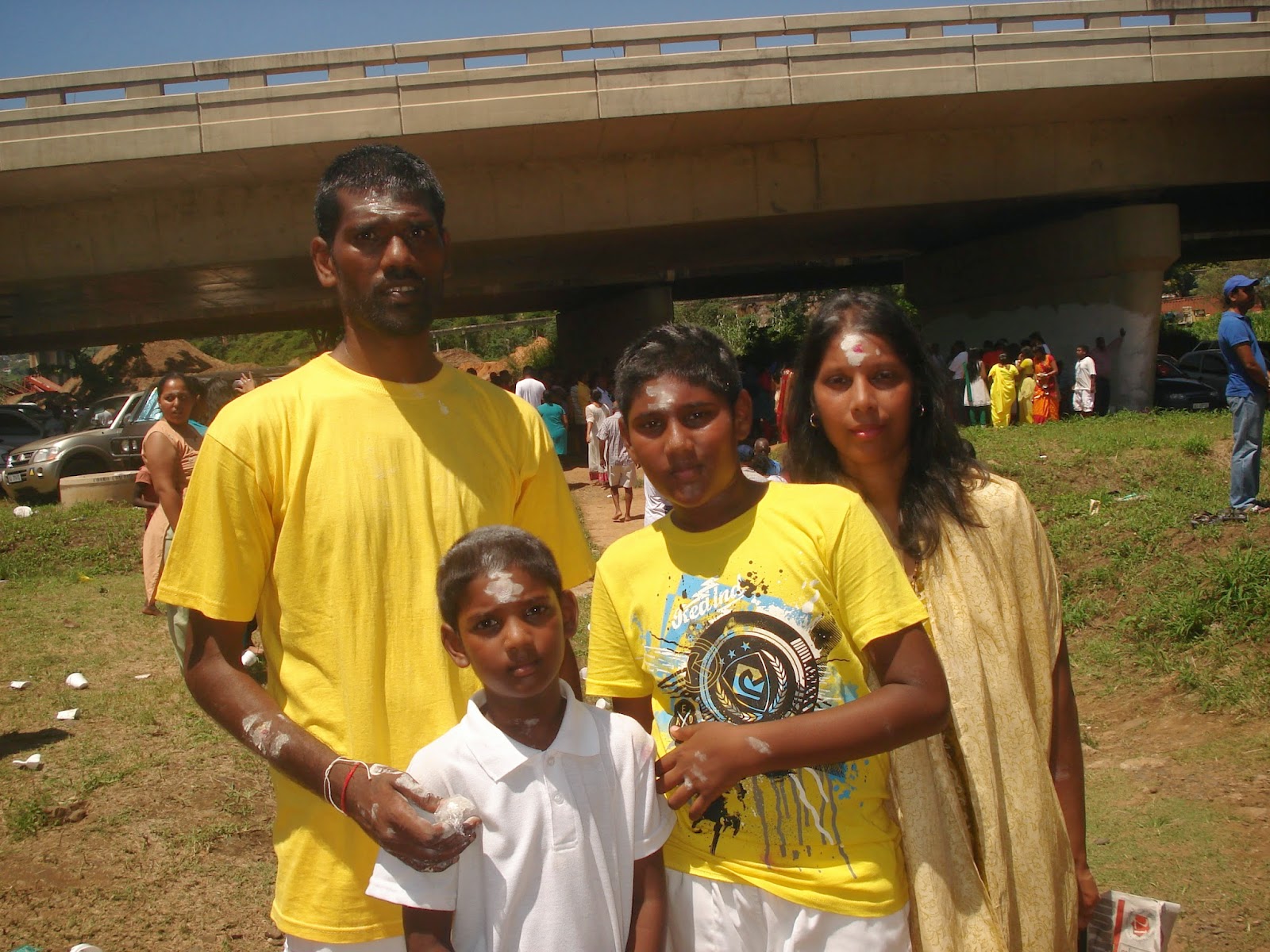 
A young man, Mr Mervyn Chetty, who participated along with his wife and two sons, said involvement in the Kavady provided them with absolute peace of mind and commitment to all that was good.
"We find that Lord Muruga makes us to lead simple and pure lives. This is a time of reflection and to help others," said Mr Chetty. 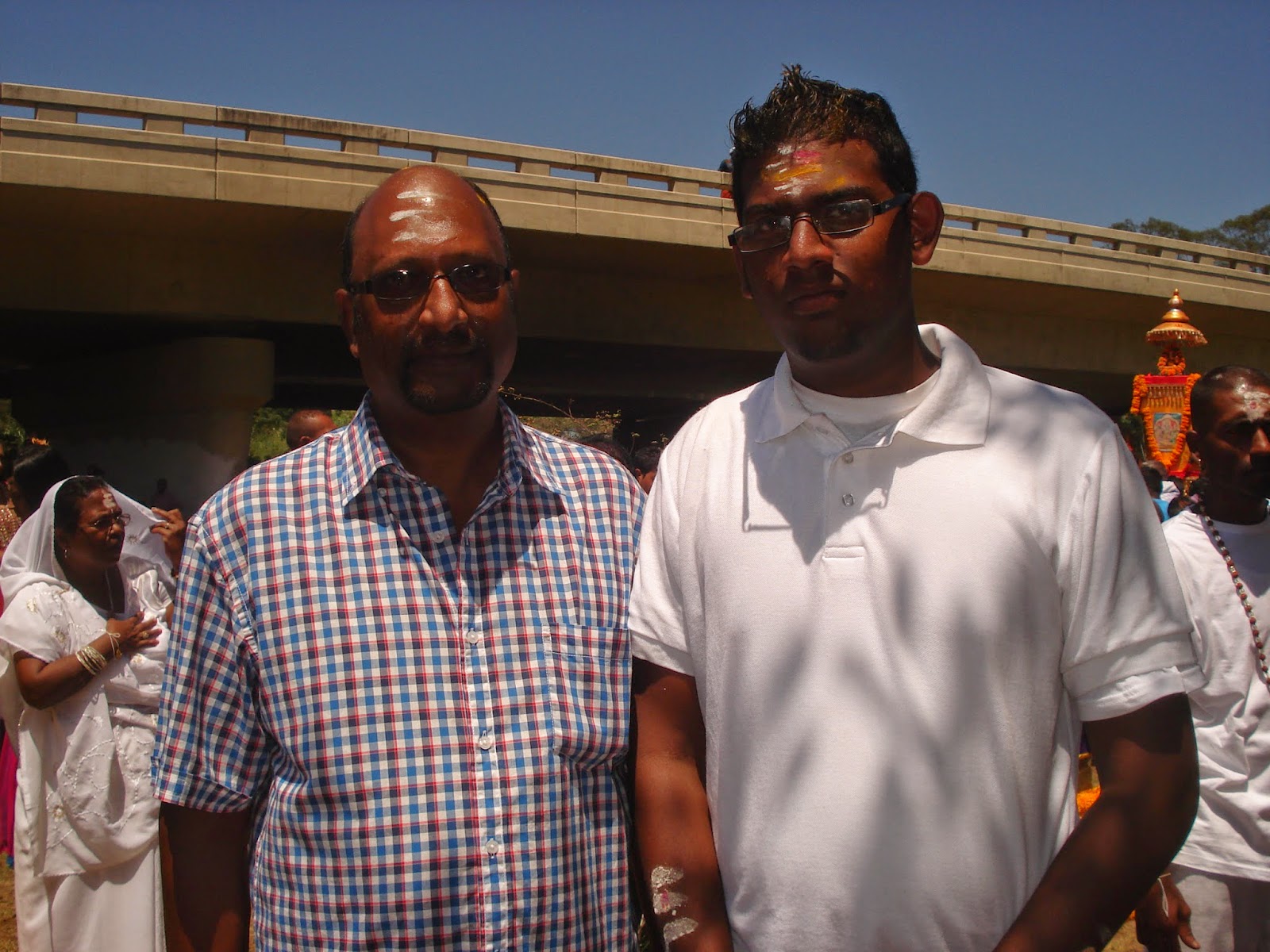 Mr Dixie Pillay, who was with his 17-year-old son Prevasen, said he had been involved in Kavady for the past 50 years and now wanted his children to be involved as well.
"Being involved in Kavady is a wonderful spiritual experience for our family. We want to ensure that what our forefathers and mothers brought with them from India is never forgotten.
"We live in a multi-cultural society and it's wonderful to see our people promoting their belief in Lord Muruga in their thousands," he said. 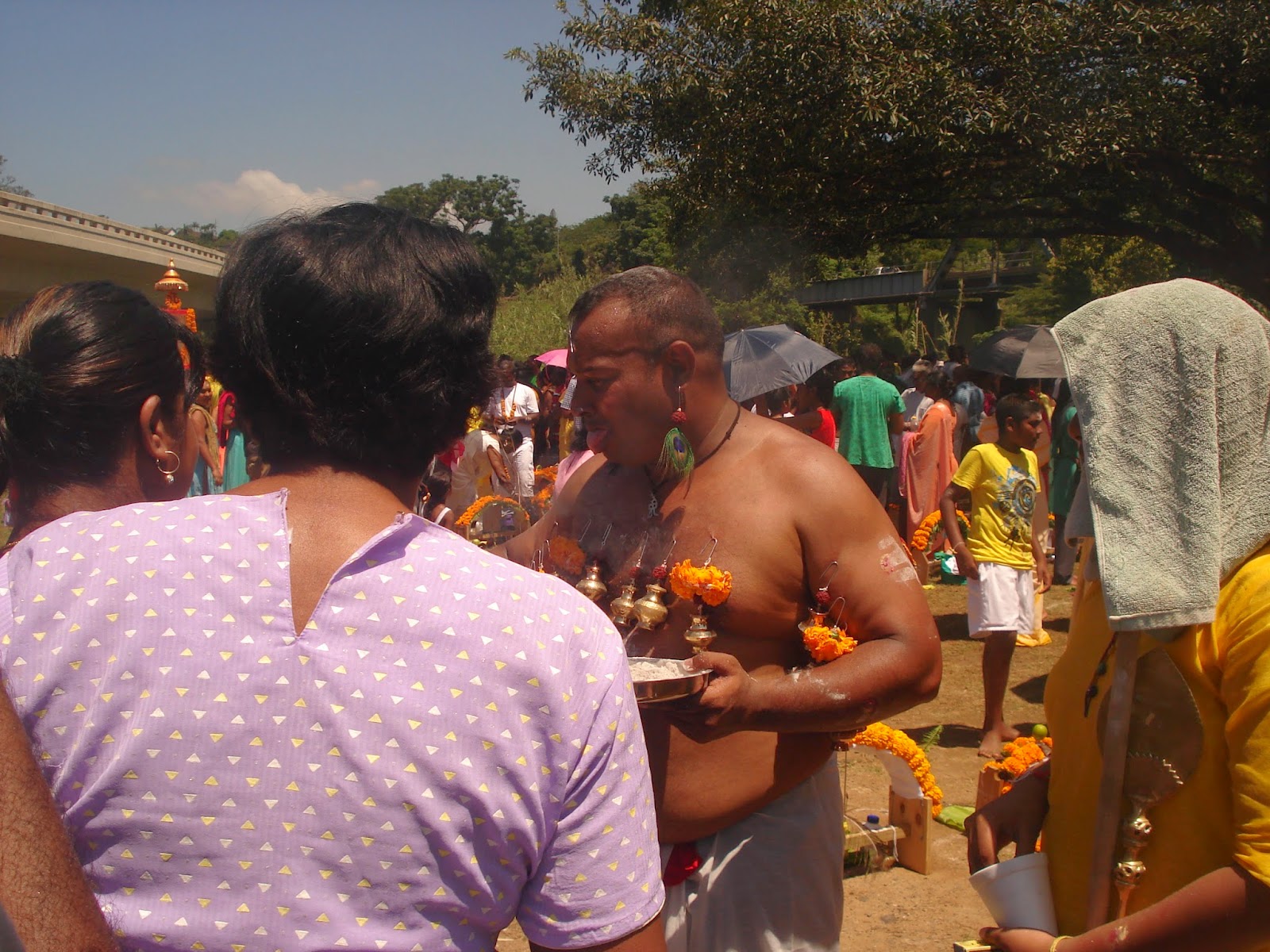 A former teacher and social activist, Mr Kanie Kisten, was present at the Kavady was there to provide assistance to his son-in-law, Mr Veeran Naidoo.
"I have my two daughters, their husbands and their children here participating in the Kavady. It's wonderful to see our children being fully involved in something that our indentured forefathers and mothers brought to his country from India," he said. 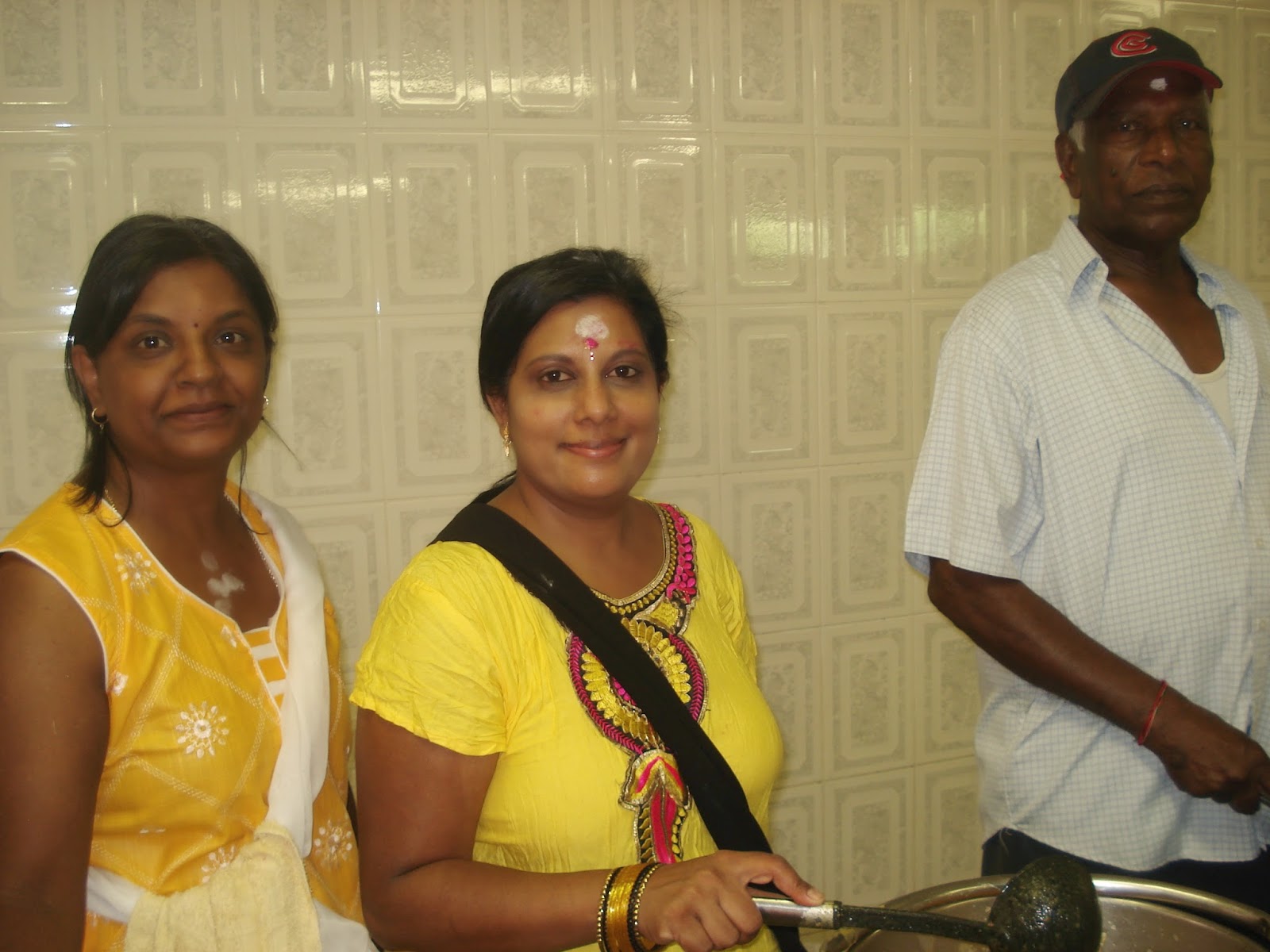 The Umdloti Drift temple, which was built more than 115 years ago, has been hosting the Kavady religious ceremony for just as long. One of the senior officials, Mr Danny Chetty, said their forefathers and mothers had sacrficed their lives in order to ensure that the temple promoted their religious and cultural values.
"We have now taken over from where they left off and are fully committed to ensuring that the Kavady ceremony is a major event at our temple," he said. 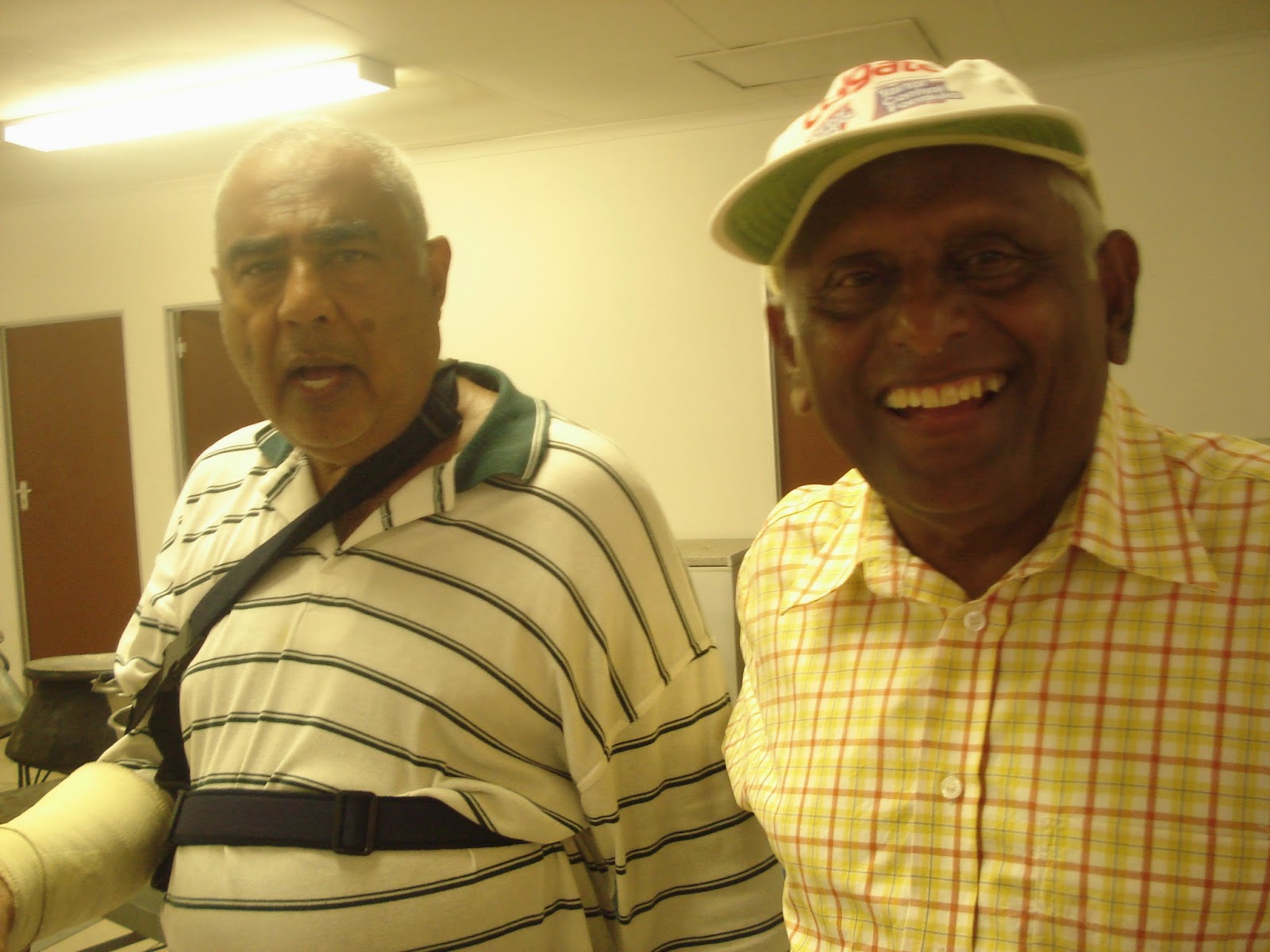 
The Shri Siva Subramaniar Alayam offcials should be praised for the efficient manner in which the Kavady was organised on the two days of February 3 and 8. In addition to catering for the spiritual needs of the devotees and the thousands of family members and other participants, the temple also provided sumptuous meals.
One of the officials in charge of the meals, Mr Reggie Naidoo, said all the preparations and service was carried out by volunteers.
"There is something in the Kavady ceremony that promotes the good in all people", he said, 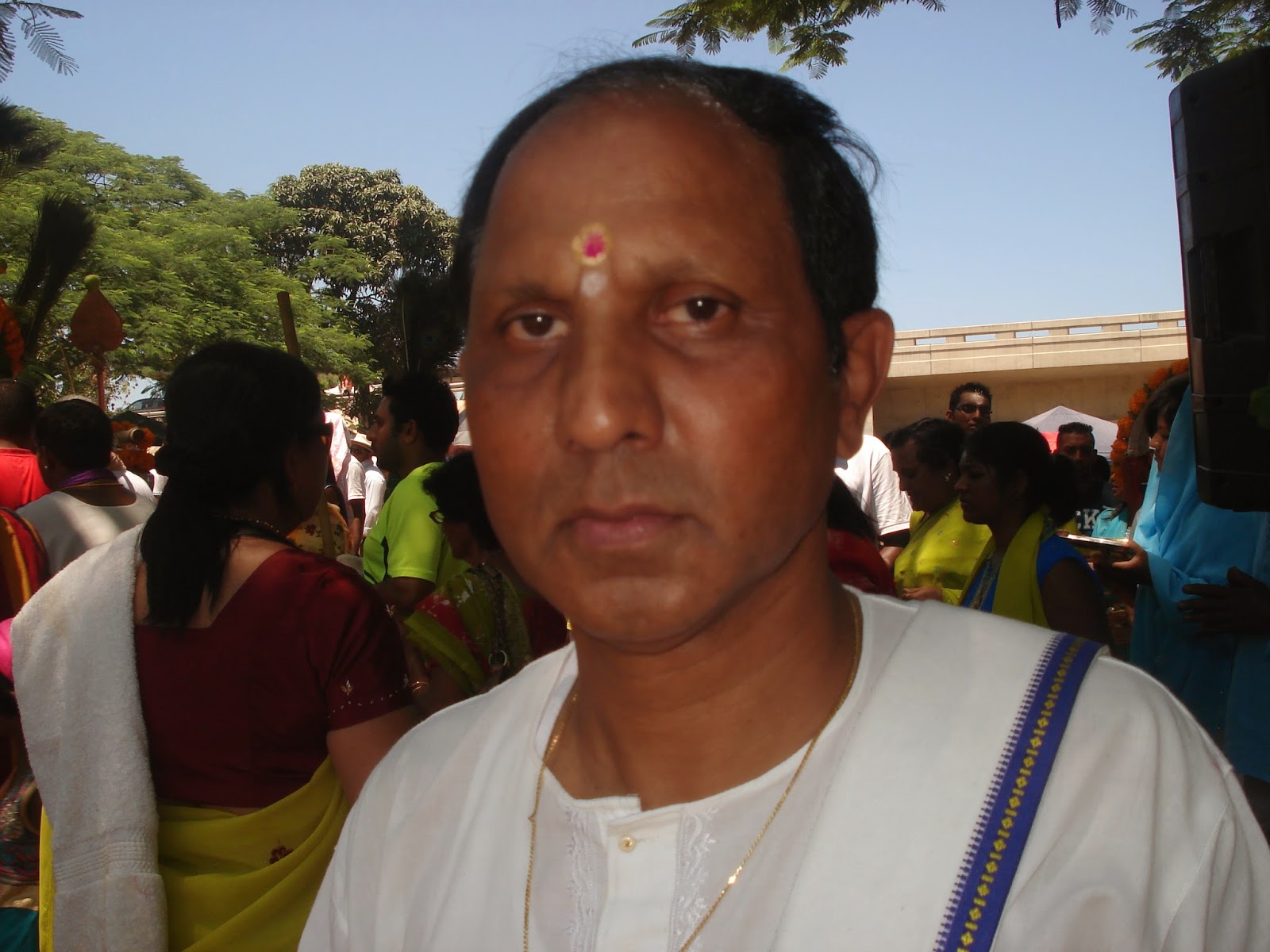 
A Tamil scholar and spiritual leader, Mr Sammandan Saragesar, said he was very pleased to see the huge numbers of people who participated in the Kavady ceremony.
"It's a joy to see that the young people have come in their droves with their parents. It's also wonderful to see different linguistic groups who are participating. It's restricted only to the Tamil people," he said.
Mr Saragesar, who has his roots in the former Mount Edgecombe Estate, said Kavady was a time of moral victory over immorality; positivity over negativity and the triumph of good over evil.
"Although we live in a material world, it's great to see that Lord Muruga through the Kavady brings us to earth.
"I can see a great deal of rejuvenation among our people. This is a blessing for us. I am now very positive that what our forefathers and mothers brought to South Africa will grow forever in our people." 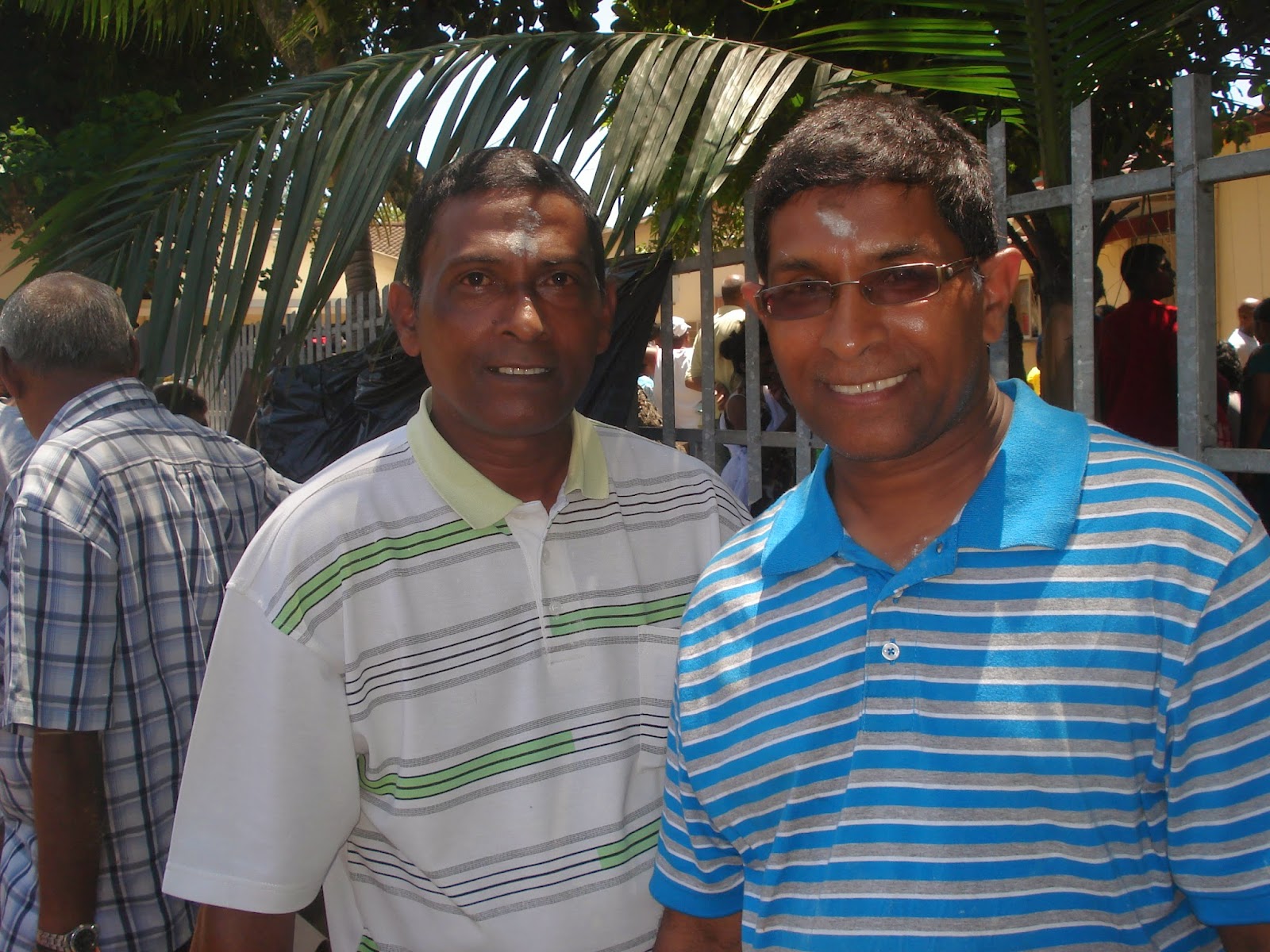 Two brothers, Mr Micky Subrayen and Kugen Subrayen, who belong to a pioneer Verulam family, were also there with their families.
"We are also thrilled that our young people are joining in the Kavady. This demonstrates that we have to actively encourage our children to become involved in our rich spiritualness", said  Kugen Subrayen.
Posted by subry govender at 1:16 PM