By Subry Govender
Two of the main candidates vying to fill the leadership position of the official opposition Democratic Alliance(DA) in South Africa want to work towards building "a better future for all South Africans" in a non-racial democracy.
Thirty-five-year-old Mmusi Maimane, who is the leader of the DA in national parliament, and Professor Wilmot James (62), DA Federal Council chairperson and MP, spoke to this correspondent about their eagerness to occupy the leadership role that is being vacated by Ms Helen Zille.
The elections will take place during a meeting of the DA  in the South African city of Port Elizabeth on Saturday, May 9 and Sunday, May 10 2014. 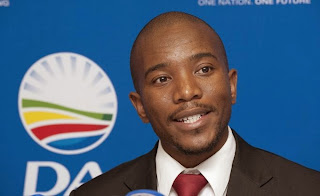 Maimane, who has made his mark in South African politics by speaking out against corruption and other social ills afflicting the country, and James, who claims he's a former anti-apartheid activist, shared their views about "a non-racial and democratic South Africa for all" during their election campaigns in Durban in the first week of May.

"WE WANT TO BUILD A BETTER
TOMORROW"

"The greatest challenge is that we have many political parties who are fighting for a better yesterday," said Maimane.
"Ours, on the other hands, is to say how do we build a better tomorrow? How do we ensure that South Africans know that we have an economy that is inclusive, have an education system that empowers them, that we ultimately build a non-racial society. The DA will champion that cause because while others are trying to take us backwards, we want to take South Africa forward, united behind a vision that says all of us can be key contributors to this nation."

"THE MODEL WE HAVE AT THE
MOMENT IS NOT SUSTAINABLE" 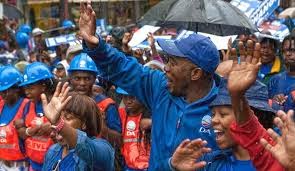 But will the DA ever become the Government of South Africa?
"A lot of the time we are living here in South Africa today reminds me of the 80s. You know in the 80s if you told the National Party Government that they would be out of power by the end of the decade, very few people would have believed you. But infact when a society becomes unstable, change is accelerated. The xenophobic attacks, the high levels of unemployment indicates that we a South Africa that faces serious tensions. And I think change is upon us, I'm seeing it in the key metros - whether those are in the Nelson Mandela Bay, Tshwane, Johannesburg, Ekurleni, Umgeni, Western Cape. We can win more metros. It will then put a more accelerated form of change and I believe South Africa will be a different place and I think - whether 1919 or 2024 - we will see a political re-alignment in South Africa. For  certainly the model we have at the moment is not sustainable." 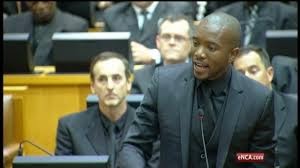 DOES THE DA REPRESENT A WHITE
AGENDA?

What about claims that the DA represents a white agenda in South Africa?
"The ANC wants to believe that a black South African in another political party can only be a puppet. They are fundamentally racist. I think they fail to recognise that South Africans can be in different parties, regardless of race. They want to perpetuate the view that black people cannot lead in other places. All that is important is that I will be coming into the DA I want to put my imprint into the organisation, I want to ensure that it is a transformed one, it's a one that will speak to the needs of the people and I think that is very possible, we can build it and I think we can continue that momentum so I am not anxious of what the ANC says."

In order to displace the ANC, you have to win the votes of a majority of the black African people?
"It's happening," he said, "and it's starting to grow".
"The majority of our voters are in fact not white. So it's already happening and we will continue the growth. And I think if you look at Gauteng, for example, the ANC had a 64 percent majority, we pulled them down to 53 percent, we got into the 30s, now 30 percent of the voting population in Gauteng cannot be white, surely. It's a diverse vote, so if we continue to grow at that level, the ANC will be out of Government."


UNDERSTANDING OF INDIGNITY
OF APARTHEID


The other main candidate, Wilmot James, is an academic who also has a strong commitment to creating a society where race will not be the criteria.
"I have an understanding of the indignity of apartheid, I was part of the struggle against apartheid, I was part of the processes that built the new constitution, I was part of the process to making sure that this democracy becomes sustainable," he said.
As far as he's concerned, this ideal has now failed South Africans.
"I believe that the DA is the only party that is left standing who can stem the tide of corruption, stem the tide of decline and what the DA needs to do is to focus clearly and concentrate on the importance of dealing with the central issues that South Africans face - and that's unemployment, poverty, inequality, poor health care, poor education and high levels of crime," he said.

James also dismissed claims that the DA represented white interests.
"It's a lie. I don't care what the ANC says because it's self-serving. We are not a white party, we do not represent white interests, whatever that is. We are a non-racial party and you can attend any of our meetings, rallies, gatherings and you can see for yourself.
"We are a party in the process of change and we believe that we have become more and more diverse as time goes on. Presently we are not a white party. It's an ANC lie and they must stop peddling that lie."
He was also optimistic that sooner or later the DA would challenge the ANC for power in the whole of South Africa.
"It's hard to predict when it will happen but we are the only growing party," he said.
He added: "We used to be a party of one percent, now we are a party of 23 percent. So we have grown enormously. One in every four voters are DA voters. Next year we have the local government elections and we have more municipalities to win and so this is a fight and we will fight it at a local level, provincial level and will eventually fight it at a national level. We have the cohesion and unity to do that."

WILL PROMOTE SOUTH AFRICA FOR ALL


James said whether he won or lost the leadership election he would join hands in promoting South Africa as a country for all people, regardless of race.
"If I win or lose it doesn't matter, once elections take place and a new leader takes over, I will be emphasising unity. I am determined to win and if I win I will be very inclusive, I will ensure that the unity of the party is the most important thing to pursue. If I lose I will stand by behind the new leader. We have to have a united party because we have a cause to fight - that cause is building a future for all South Africans, that's what matters, the cause is to have a real democracy and I will be part of a unified effort to get there."
Political analysts and party members say who ever takes over from Zille will have to work in a team if the DA hopes to become the governing party in a decade or so.


But with only hours to go before the new leader is elected - it seems that at this stage the young Mmusi Maimane may have the edge on Wilmot James. He has received the open support of a number of top leaders within the DA - including the Mayor of Cape Town - Patricia De Lille - a former struggle activist and Pan Africanist who joined the DA a few years ago.
Most analysts say the DA needs a leader who will be able to draw the support of the majority African people if it has any hope of displacing the ruling ANC as the governing party of the country. - ends - Subry Govender

Posted by subry govender at 8:33 AM