SOUTH AFRICAN TAMIL FEDERATION, OTHERS INDIAN-ORIGIN LEADERS AND ANC SPEAK OUT AGAINST THE DEFACING OF MAHATMA GANDHI AND OTHER STATUES

(A statue of Mahatma Gandhi in central Johannesburg was defaced by a group of people who wrote a slogan:  "Gandhi must go.")

The South African Tamil Federation and its affiliates have joined other South Africans to condemn the vandalisation of the Mahatma Gandhi Statue in Gandhi Square in central Johannesburg at the weekend.
A 21-year-old man, who was part of a group of people who smeared the statue with white paint and scribbled unsavoury comments about Gandhi, was arrested soon afterwards and scheduled to appear in the Johannesburg Magistrates' Court on Monday, April 13 2015. Another person has also been arrested and will appear in court on Monday as well.
The group of culprits also defaced a nearby plaque about Gandhi's campaigns against racism and colonialism in South Africa.
The Gandhi statue is situated near the head office of the ruling ANC in central Johannesburg.
The slogans painted on the statue read: "Racist Gandhi must fall.", and "Gandhi must go." 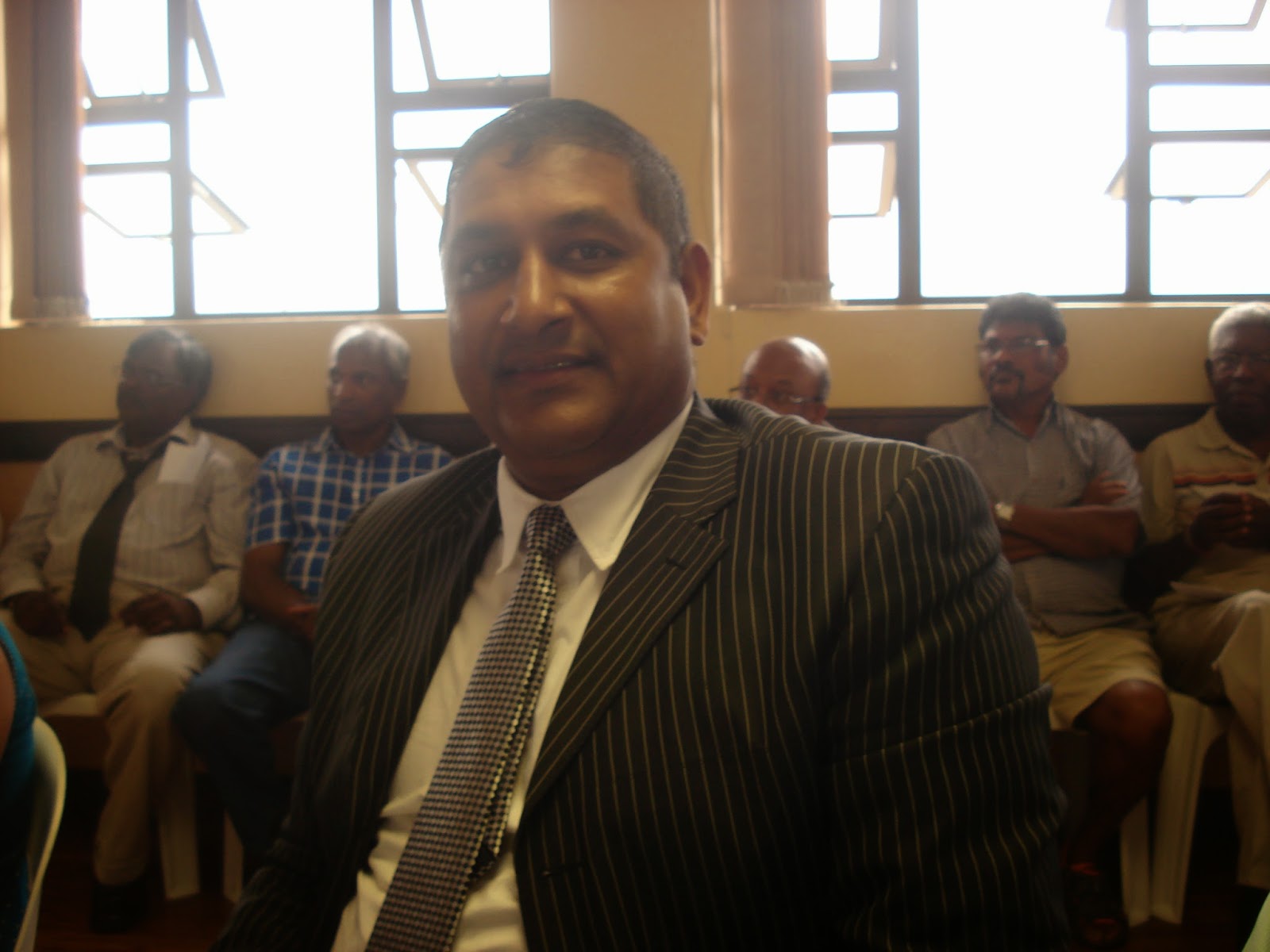 Mr Karthi Moothsamy, chairperson of the Tamil Federation, made an urgent appeal to the Government of South Africa and all Provincial Premiers to enforce a mechanism of intervention that would ensure education of the younger generation about the roles "many have played in our national quest for freedom and democracy regardless of ethnic origin".
"The South African Tamil Federation," he said,  "are keen to preserve the legends of stalwarts within our fold who have been significant role players during the struggles for freedom".
He said: "There have been many South African heroes and heroines of Indian-origin and other prominent international figures who have contributed to shaping our journey towards freedom and equality of all South Africans. We believe that education of their roles is of utmost importance to ensure that their place in history is reserved and we are able as a nation to appreciate with understanding their contribution.
"We appeal to the Government of our country to ensure that a statement citing reasons for Mohandas Karamchand Gandhi’s place of honour is released immediately to start the process of education.
"We trust that we will receive the support needed to ensure the preservation and protection of all monuments that have been erected to honour the role of South Africans of Indian- origin have played in ensuring the realisation of the Freedom Charter (The Freedom Charter is a document drawn up by the ANC, the South African Indian Congress, Natal Indian Congress, Coloured Peoples' Congress and the Congress of Democrats(white progressives) in 1955 as a guide for the development of a non-racial and democratic future South Africa.")
A spokesperson for the Gandhi Development Trust in South Africa, Mr Satish Dhupelia, reacting to the incident said it appeared that many young people in South Africa today do not understand the part played by Gandhi in promoting freedom and liberation from racism and colonialism.
"Mahatma Gandhi was admired by people such as Dr Albert Luthuli and Baba Nelson Mandela and they often said that they were inspired by Gandhi.
"Leaders such as Martin Luther King and recently President Barack O'Obama also said they were inspired by Gandhi," he said.

The grand-daughter of Gandhi in South Africa, Ms Ela Gandhi, who was a former MP of the ruling ANC in the new democratic parliament, told the South African Broadcasting Corporation (SABC) on Monday that it was a shame that some people were so intolerant that they had no respect for others.
But, she said, vandals would not succeed in wiping out "our history".
"If these people are not stopped then all of us would suffer," said Ms Gandhi.
The ruling ANC also condemned the vandalisation of the Gandhi statue and called on the police to take action against the perpetrators.
"We condemn whoever was arrested and call on the police to do their duty," said Mr Keith Khoza, a spokerson for the ruling party.

The Gandhi statue has been vandalised at a time when there is a major controversy over the removal of statues that were built during the colonial and apartheid eras. 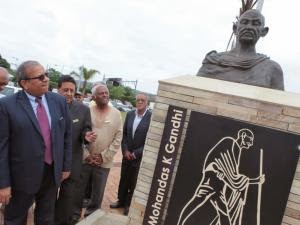 (Mahatma Gandhi statue in the town of Verulam, north of Durban. Gandhi addressed his last meeting in the town before returning to India in the early 1900s).

There are similar Gandhi statues in the towns of Verulam, north of Durban; Pietermaritzburg, where Gandhi was thrown off a train while travelling from Durban to Johannesburg; and in Ladysmith, in the midlands of the KwaZulu-Natal province.
Gandhi was thrown off the train by a white conductor because he sat in a coach meant for "whites only".
The campaign to remove colonial statues began at the University of Cape Town recently when students called for the removal of the statue of Cecil John Rhodes, a former British merchant class man and business tycoon, who developed mines in South Africa and Zimbabwe. Prior to Zimbabwe's independence more than 35 years ago, the country was known as Rhodesia, named after Cecil John Rhodes.
This statue at the University of Cape Town has now been removed after a decision by the University Council.
Statues of colonial and Afrikaner leaders in Cape Town, Pretoria, Durban and Port Elizabeth have also been defaced with black activists calling for the removal of all colonial and apartheid statues.
This campaign is being led by the radical political party, Economic Freedom Fighters(EFF), led by the firebrand Julius Malema.
However, President Jacob Zuma and his Cabinet Ministers have condemned the defacing of the statues and said South Africa's history must be protected so that future generations could understand the past.
President Zuma said his government would not tolerate lawlessness and if people were opposed to statues depicting the apartheid and colonial past, then negotiations must take place for those statues to be removed to museums.
This past weekend, a prominent media activist and journalist, Mr Dennis Pather, warned that it would not take long for those who want to get rid of apartheid and colonial statues to also target statues of Mahatma Gandhi.
In his column for the Durban-based Sunday Tribune, Pather, among things, wrote: "What if some misdirected race-monger with little respect for histroical truths claims black people are suffering because Indians control the economy in KZN(which they don't, of course?) (KwaZulu-Natal is the province where most of the descendants of indentured labourers live and work. There are reported to be more than 1,2-million descendants of indentured labourers in South Africa.)
"Will the statues of Mahatma Gandhi and teenage martyr, Velliamma Moodliar, also get the Dulux treatment?"
Pather said those promoting the removal of colonial and apartheid statues had more social and economic priorities to tackle.
The campaign against the colonial and apartheid statues also takes place at a time when a wave of xenophobia is sweeping the country, especially KwaZulu-Natal, against Africans from other parts of Africa.
At least five people have been killed and hundreds of foreign Africans have been displaced due to the latest wave of xenophobia.  Widespread attacks against foreign Africans first took place in 2008 when more than 100 people were killed around the country.- ends (Subry Govender)

Posted by subry govender at 4:16 AM